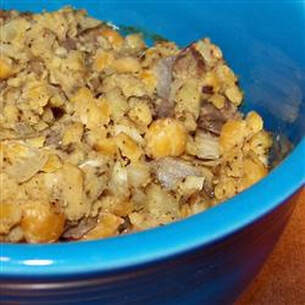 Preheat oven to 375°F. If your kitchen is cool and the ghee is solid, put it in the oven in a heat-resistant mixing bowl to melt while the oven is heating.

Coarsely chop the cauliflower and put it in a food processor. Pulse several times to break down the cauliflower into fine pieces (only pulse several times, as you still want some larger chunks).
In a mixing bowl, toss cauliflower, onion, garlic cloves, celery, and carrots with ghee, sea salt, pepper, and paprika. Coat well with the oil. Spread mixture out on an oven tray, and roast for 15 to 20 minutes, until cooked through and slightly browned.
While cauliflower is roasting, cook the lentils: In a medium saucepan, combine lentils, bay leaf, and water. Cover and bring to a boil. Reduce heat and simmer, still covered, for 30 to 45 minutes, until lentils are cooked through. If water remains, drain it. Remove bay leaf and discard. Lentils should still hold their shape and not be mushy.

When cooked, remove the veggies from the oven. In a large mixing bowl, mix the veggies, cooked lentils, thyme, pecans, and dried fruit. Mix until you reach your desired consistency. Use as you would normal stuffing.